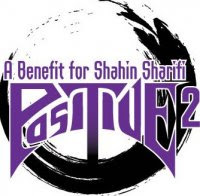 Taking a break from whining about my insurance woes, to blog about a friend who has some actual problems. Shawn is a friend of mine from way back in middle school. Actually, he was my first boyfriend in 7th grade. It lasted about a month, and we were too shy to even hold hands. I cried in school when he broke up with me. How humilating. Didn't middle school suck? More on middle school next week.

Shawn is a talented musician as well as an all around nice guy. This kind of thing could happen to anyone.

"On January 23, 2010, Shahin (Shawn) Sharifi underwent emergency surgery to remove a serious staph infection from his cervical spine. A spinal epidural abscess had left him paralyzed from the chest down. The surgery was successful; however Shawn remained paralyzed. Six weeks later, he was finally able to wiggle his toes, and had regained strength in his upper body. He has since regained some conscious movement and strength in his legs. His surgeon says that now that movement has returned, there is no limit to how far he can recover. Shawn is determined to kick this paralysis in the ass.

"In spite of this extreme life-changing event, Shawn has maintained an incredibly positive attitude. In fact, his mantra after the surgery inspired the name of this benefit concert: Positive². Positive Thought Combined with Positive Action Brings About Positive Results.

"Our goal with Positive² is to spread this message, and raise funds to help Shawn adapt to his new, unexpected life. 100% of proceeds will go toward hospital bills, intensive physical therapy, lost income and home renovations to aid Shawn in his daily activities. They will also be used to establish an education fund for Shawn's new career path."

I can't be in Virginia for the benefit Saturday, so I donated a basket as well as a couple of wine sets for the silent auction. If you've ever felt the urge to help someone in need, maybe you'll feel like helping my friend. If not, that's okay. Just let yourself be inspired by his drive and courage.
Posted by Kari Weaver at 10:49 PM