Today is my 16th wedding anniversary. We celebrated by Jay leaving for work extra early at 5:00am at which time I started firing the cone 10. I planned a special dinner of Jay's favorite dry-rubbed turkey breast and fresh blackberry cobbler. 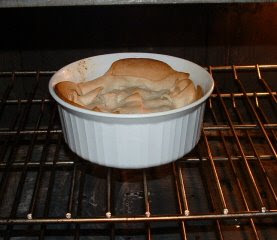 I'm still trying to figure out the best way to fire this kiln. It's so frustrating. I follow the directions in the Bailey manual, and the initial climb is too fast. I can even out the temperature top to bottom, and reduction starts smoothly, but at a certain point, the kiln stalls and my attempts at keeping the rise and the reduction appear to be floundering. Jay has some theories as far as how much fuel I need to get the kiln to temperature. I am trying to be open minded, but am I forced to pit efficiency against quality. Will the results be favorable firing at a higher gas setting for a shorter period of time versus lower gas over a longer period? 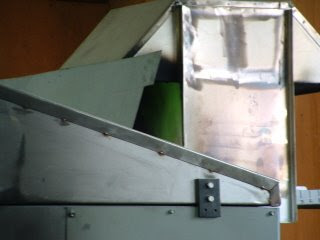 Green flames up the chimney!
This firing took nearly 14 hours, not including the overnight candling. I was aiming for Val Cushing's method of firing only with the damper after body reduction. He recommends 8 hours minimum from cone 08 to cone 9. On the other hand, John Britt's book suggests the same temperature range can be covered in 4-5 hours. Previously I have had trouble keeping the climb steady while retaining a reduction atmosphere. Although Jay thinks the firing took too long, I think I have confidence in *most* of what I did. 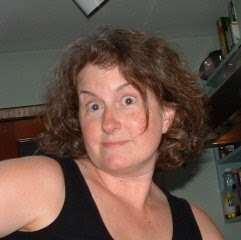 Caffeine has been my friend today. Time to offset that with a couple of beers so I can sleep tonight. I'll be able to post kiln results early next week.
Posted by Kari Weaver at 7:34 PM No comments:

I must be streamlining my glazing because I am a day ahead of schedule. That said, I'm not sure why I never have my cone packs made ahead of time. Mr Coffee to the rescue. 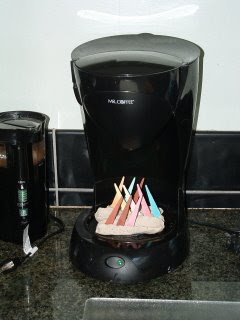 I'll candle tonight and then start firing around 4am. Jay has to be in Marshall by 5am, so lucky me I can get an early start. I'm going to change up my firing a little to get more reduction this time. Might try Val Cushing's method of using only the damper after starting reduction. It's worth a try. Most of my glazes look good in moderate reduction, but I've got a Shino that is not living up to its potential. 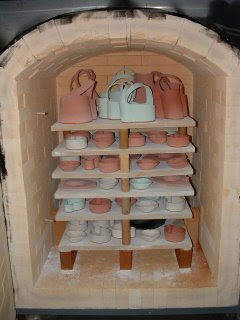 After much procrastinating, I mangaed to make it into the kiln room to clean up and prep for glazing. So much crap lands in the kiln room, and it's left up to me to find it a proper home. Most of it I just chuck down the stairs into the studio. That's a job for next week! 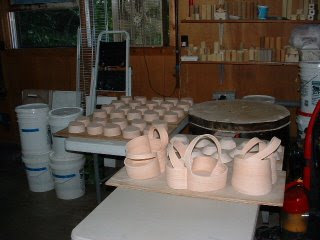 So, I have 9 baskets plus a couple of refires, 30-some wine bottle coasters and a couple dozen heart bowls. I also made some ikebana containers, modelled after my butterfly feeders. This was a customer suggestion. The dishes are slab rolled and slumped. I really enjoyed making them as I can press some textures in. I single-fired several in the cone 6 electric last week. I also really enjoyed arranging the flowers in those ouchy little pin frogs. The lily is from my own garden. 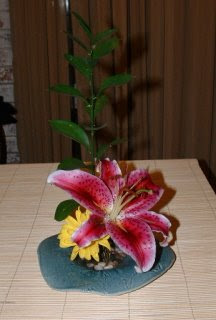 In the morning, I'm going to mix up a Shino and a couple of color variations of Fake Ash that I like. I will wax and perhaps glaze some of the work. Planning on firing to cone 10 on Saturday. This will be my 4th time firing this kiln and my second time firing to cone 10. Stop by if you're in my neck of the woods.
Posted by Kari Weaver at 8:19 PM 1 comment:

I think I've recovered from last weekend's Bele Chere Festival. The gallery is reset and most everything else is unpacked. I generally had a good time. I was relieved to have made my booth fees by early afternoon on Friday. So I just sat back and watched the people. Anyone who has been to downtown Asheville knows it's a prime place to people watch.

The booth picture looks a little lame, but it's hard to get a good photo. 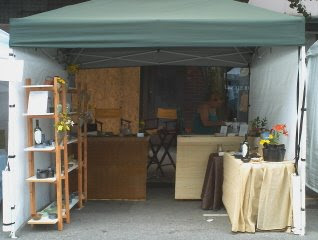 My first visitors Friday morning were my neighbors, taking in the festival before too many people got there. Joy Bennett from the Lace Toadstool popped in to say "hi". I had a customer so we didn't get a chance to chat. Jay came down in the afternoon, and I took off to see more of the festival. I stopped at Gabriel Kline' s booth. He teaches at Odyssey and has some nice cone 6 work. Later, when I should have been closing up the booth, I left again to catch some of Cracker and Dar Williams. I even got the chance to embarrass my offspring singing and dancing along to "As Cool As I Am". I thought you'd know this already.


Saturday morning I met one of Shane Mickey's students although he didn't give his name. My friend Brenda drove up and worked the booth with me until we closed. Good thing since the friends we were staying with had a water heater emergency, and Jay couldn't come back down. Towards evening, another studio-mate from Clemson stopped by with her husband. We are facebook friends, but I hadn't seen Marty for several years. It's so good to see old friends. Jay's boss came by and, after tracking down some of his friends, said goodbye by bringing me a Wee-Heavier from the French Broad Brewery. Yum!


The festival changed on Sunday. With no alcohol sales on the street, we saw more families and made more sales. Jay sold my green and white teapot (the one on my homepage) while I was up the street visiting the River District tent talking to Nelle Pingree, and later I sold one of by bigger baskets. Also met a gentleman who lives in Clemson and knows my Ceramics Professor and Mentor Mike Vatalaro. Small world.


All in all the festival was a success. The weather cooperated, sales were pretty good, and I was located on the shady side of the street. I'm not sure if I'll do it again next year. A lot will depend on how well I do at the Mt. Mitchell Crafts Fair next weekend.

In the meantime, I fired a bisque overnight and plan on firing a cone 10 this weekend.
Posted by Kari Weaver at 5:49 PM No comments:

Bele Chere is this weekend

Okay, I might be crazy to have let someone talk me into a 3 day show, but Bele Chere is so much fun! My booth is across the street from Barley's Taproom on Biltmore Avenue. Stop by and say hello. I'll post pictures of the booth, etc next week when I get home!
Posted by Kari Weaver at 11:47 AM 1 comment:

Not that I didn't have enough to do firing the Runt and getting ready for Bele Chere, I happened to run across Weebly at the foot of Sharon Sinclair's Energy-Shifter website. Sharon is a FB friend and the co-founder of America Creates, an online showcase for fine arts and crafts. Check out http://www.americacreates.com/. I have an online gallery there.

Anyway, as I discovered by following a link from her FB page, Sharon is also a Personal Life Coach. That in itself is interesting, but as I scrolled through the website, I noticed that the site was free through Weebly so I checked it out and started putting some stuff up. It's pretty user friendly. I was able to piece together what I have so far even with the kids running around asking me questions.

I expect to make progress during the coming weeks so keep checking back www.singingtreepottery.com. This pottery thing is getting pretty serious, isn't it?
Posted by Kari Weaver at 7:31 AM No comments: 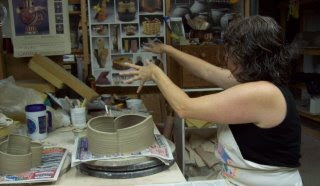 Magic in the studio this week. Well, I kicked ass for about the last week and a half, hoping to finish enough work to fire a cone 10 before Bele Chere. I finished the work: about 35 wine bottle coasters, 30 heart bowls, 8 baskets and several ikebana pots. Unfortunately, time was not on my side, and the work didn't dry fast enough to get bisqued with enough time to glaze fire. Oh well. I cleaned my house instead. 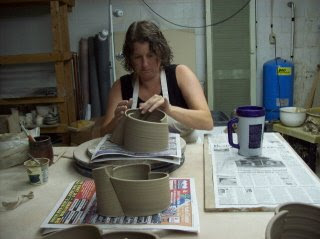 My darling daughter decided to document me throwing and piecing my pots. She loves to be with me in the studio, but not to make art. She organizes my glaze ingredients and straightens up my work table. Above, I am piecing together several baskets. I didn't crop out all the shit in the background: one of the closet doors from the demolition (there are a total of 5 and I can't for the life of me figure out why we didn't haul them to the landfill), the rolls of photo background and the wire hanging from the ceiling. I work in a dungeon. 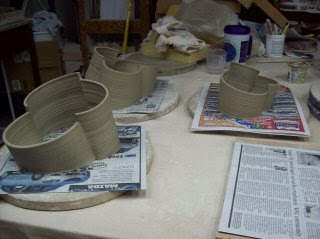 Here are three baskets setting up so I can attach handles. After reading about this tip, I tried waxing the joints, and, although not foolproof, I think it helped keep the cracking to a minimum. These are made with Zella Stone and were loaded in the bisque earlier this evening.

Even though a gas firing is out, I have almost enough work for a cone 6 electric before Bele Chere. I may not be able to help myself.

Posted by Kari Weaver at 7:14 PM No comments:

Back in the Saddle

After a successful Studio Tour the kids and I headed off to stay in Nags Head with friends. Awesome weather, food and drink but the fun didn't stop there. Their daughter travelled back to the mountains with us and they joined us mid-week for Independence Day follies. Add another family of four to ours plus the three from Virginia and we had a full house indeed. I'm still buried in laundry.


With all the company gone by Monday morning, I hit the studio hard. I have two arts and crafts shows coming up, and thanks to the TRAC Tour and my almost daily visitors, my stock is dwindling. I have high hopes of firing a cone 10 before Bele Chere in Asheville July 24-26 and a cone 6 before the Mt. Mitchell Crafts Fair in Burnsville August 7&8. I just keep thinking positive thoughts. Besides, I've been told that sleep is overrated. 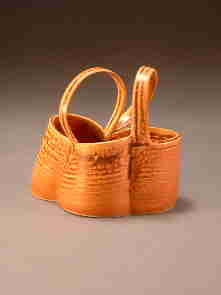 Meanwhile, I became a member of Toe River Crafts in Celo which is celebrating its 35th anniversary this year. There is a special exhibit of member work and the above basket sold within a few days. I'm so sad to see them go sometimes.

I don't have any shows lined up for the fall but my main goal is to piece together a website. My head is full of ideas, but I really need to keep a slow pace: first make the work, then market it. I already can't keep up with my Etsy site and I feel like a bit of a failure. As for the website, I reserved my domain name 6 months ago and am looking into using some kind of template for the time being. I can always redesign it later, but I just don't have the time nor the inclination to reinvent the wheel.

So it's back to work. With the kids home for summer break, carving out studio time has been a challenge. I've been coaching my kids on how to be self-reliant while I'm working. This means not interrupting to tattle, cleaning up after themselves and making good lunch choices. Yesterday, Allison ate 1/4 of a watermelon and potato chips and onion dip.
Posted by Kari Weaver at 12:29 PM No comments: