Back to Doing What I do Best

I know I said I was going to throw some cups. And I know that I should stick to my word. But, let's face it, when there are potters out there who are making gorgeous cups, is it really necessary for me to do make cups too? After seeing these cups on Meredith's blog, I decided to leave the cup making to the pros. At least for now.

Besides, the cups I threw were taking forever to dry, and I nearly forgot about them. I had left way to much clay at the base so they requited an inordinate amount of trimming. And then the kitties decided to take a tap dance on the ware board, gouging several cups and moving the plastic so that they dried too fast. Plus, it's really cold in the studio. Wah.

After tossing the cups into the reclaim bucket, I sat down and threw some small cylinders. No pictures since you all know what they look like. I'm going to try making some small baskets. One of the ideas someone floated at our last Clay Club was the Orton cone box thing. I wonder if I can go that small. I think it's harder than it looks.
Posted by Kari Weaver at 3:32 PM 3 comments:

I have really missed blogging. Our computer sits in our dining room, and with the kids home snow day after snow day, there is simply too much competition for computer time. I gave up. Alas, we have had two good weather days, so I have been catching up with old blogging friends over a nice cup of tea. I decided to figure out how to put some photos with this post.
We had our January Clay Club meeting last night at Elizabeth Westveer's studio. We discussed ideas for this year's meetings and John Britt videoed a few demos (including mine). He'll post them to the Clay Club blog and You Tube later in the week.

One demonstrator was Patty Bilbro. She demonstrated centering two large lumps of clay one on top of the other, rather than trying to center one huge lump. I took a few photos. 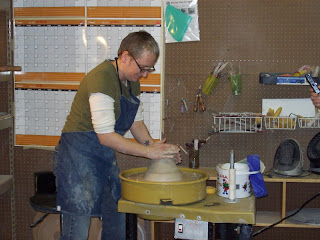 Hooray! We have a photo! 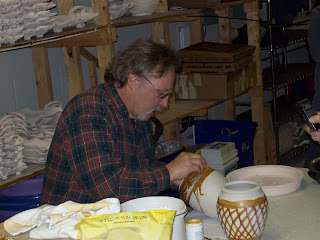 The other demonstrator was Doc Welty, who showed us how to create raised surfaces with shellac resist.

I needed Brian's blog post as well as GIMP's online tutorial to walk me through how to resize the images for the web. I ran into a snag after finishing and saving the picture of Patty. The second photo I tried to resize was instead "layered' onto the first, as well as cropped to show only Doc's face. The only way I could figure out how to get rid of the first image and bring up the second one without the cropping was to close GIMP and restart it.

It seems that GIMP offers a lot more then I need in a photo program. I don't manipulate images or even really crop them much. I don't change anything in the photos of my pottery except sizing. And since the forecast is calling for snow tonight, I'm going to congratulate myself on this baby GIMP step, and turn the computer over to the kids again.

I can always tackle GIMP in the spring.
Posted by Kari Weaver at 8:42 AM 3 comments:

MIA For Too Long

Happy New Year! Our computer survived its ordeal last month. I'm not sure I did though. Or my family for that matter. Blogging is an outlet for me. Without it...well, let's just say, I've had a lot to say.
One thing that didn't survive was my photo software, you know the one: an archaic version of HP Photo Something-Or-Other, origins unknown. Not sure if it was a good or not, but I knew how to use it. Quite some time ago, I posted about trying to use Piknik or something for Call for Entry. Brian Fields was kind enough to email me about Gimp, so I am finally going to try it.
For now my photos are safe on CDs, and I've been taking more and more. We've had some beautiful snow up here and are expecting more in the next day or so.
Since having the kids in school is tenuous this time of year, I am racing to catch up on household chores, so I can get back into the studio by next week. I was unhappy with two of my cone 6 R glazes this last firing, so I need to make some work and loads of test tiles.
Posted by Kari Weaver at 8:10 PM 4 comments: