What I've Been Up To When I Haven't Been Shovelling

I seem to have an unhealthy obsession with this driveway and all this damn snow and ice. I have been hauling groceries, luggage and pottery up the hill and forcing the kids to walk down the hill to ride to school (on those few days that they have actually gone to school). I'm not allowed to use the pickaxe, so Jay suggested the sledge hammer. It does and adequate job, but is not quite as satisfying to swing. Hopefully, the warmer temps later this week will assist me in my endeavors. Then I will gripe no more. 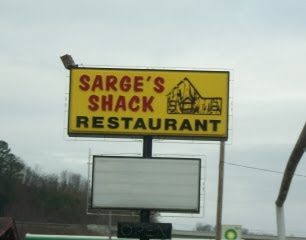 I wanted to post a couple of pictures from our holiday vacation. My father-in-law occasionally sings with some folks at a place called Sarge's Shack. They convinced Allison to get up in front and sing a few songs with them. She did a fine job and made her Grandpa very proud. 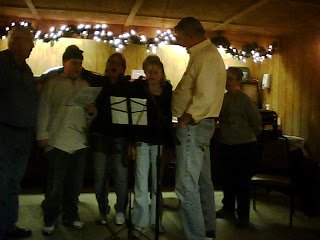 He's practicing on some new songs so they can sing some together the next time we visit.