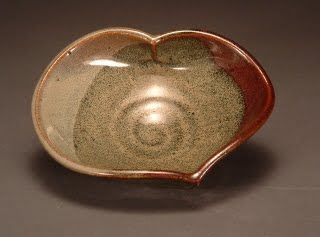 After a long hiatus, I am loading up my Etsy Gallery with pottery. Everything is 10% off until December 24. So far, I have only heart bowls, but vases and wine coasters will go on today, then my cut up pots. I really need a creative name for them.
In other news, my van breathed its last sigh yesterday. The transmission got stuck in third while we were on our way to Ben's eye appointment in Asheville. Jay met me in Mars Hill, and we got it home, slowly, but alas, I must car shop this week. He's nearly certain that it's not worth fixing. Before he could look at the van though, he had to put his worn out chain back on the motorcycle and replace the belt tensioner in the truck. 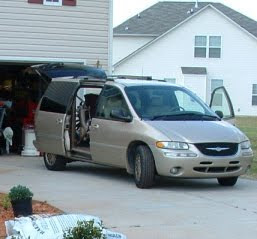 So now, the van occupies the same spot that the Trooper vacated only last week after we had it towed away. It had been sitting since March when it blew a head gasket. I think Jay's daily 100+ mile round-trip commute is taking its toll on the vehicles. 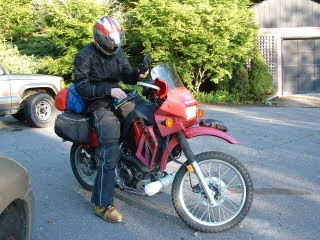 So my job today (along with posting more pots on Etsy), is to procure financing and visit local car dealers. Jay would never agree to a brand new vehicle, but, as much as he hates a car payment, I think he'll go for something that he can spend more time driving than climbing underneath. I'll bet he wouldn't mind something that is more of a babe magnet than a gold minivan. And afterall, it is December. A little cold for even Jay to truly enjoy motorcycle commuting.
Posted by Kari Weaver at 6:13 AM